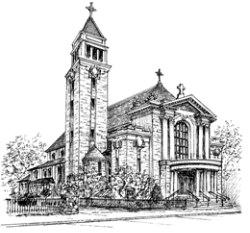 
The 1890's were a period of ferment in Jersey City.  As the population passed the 200,000 mark, transportation took several giant strides forward. The new electric trolley gave workers the flexibility to move a little farther from their jobs, while Hudson County Boulevard provided a modern link from the tip of Bayonne north to the Bergen County line. These changes opened up the west side of the city and created the need for a new church to serve the Catholics who were moving to the area.

In response to this need Bishop Winand M. Wigger authorized the formation of St. Aloysius parish, which was incorporated on May 12, 1897, and appointed Fr. John A. Sullivan as its first pastor.  While plans were being made for a combination church and school, the young congregation filled at first two and soon three Sunday celebrations of the Eucharist at Donohue's Hall West Side Avenue near Montgomery Street. The cornerstone for the first parish building was laid on October 17, 1897. From these humble beginnings grew a physical plant and a spiritual community which would influence the lives of tens of thousands of families in the course of the next ninety-five years.

St. Aloysius School opened in 1898 under the direction of four Sisters of Charity of St. Elizabeth. Until 1903, when the parish was able to purchase a home on Kensington  Avenue to serve as a convent, the sisters traveled daily to the school from their residence at St. Aloysius Academy, then located on Grand Street.

In 1905, as Hudson County was drawing up plans for West Side Park, the parish commissioned the architect Charles Edward to design a granite French Renaissance style church and bell tower. Accommodating nearly one thousand persons, the new house of worship and assembly was dedicated on February 9, 1908. until his death four years later, Fr. Sullivan tends a rapidly growing congregation which numbered 4900 in 1912.  He was succeeded by Father James J. Hall, who served for more than seven years until he died in 1919.

The third pastor, Monsignor Mark J. Duffy, was appointed on August 1, 1919, and guided the parish until 1949. Shortly after his arrival he began to formulate plans for a new school building which would include a high school. The elementary school transferred to the new structure in September 1923 and the high school opened in the following year. As both schools continued to grow, the original 1897 building was renovated in 1929 for the use of the lower grades of the elementary school.

Monsignor James A. Hughes, Pastor from 1949 until his retirement in 1967, organized the renovation of the high school and the 1959 redecoration of the church at a time when the parish roster was at its peak. During the 1950's standing room only was routine at Sunday masses. However, the move from the cities to the suburbs in the postwar years eventually affected St. Aloysius as the number of parishioners declined; at the same time the ethnic mix shifted from one that was predominantly Irish to that of one that embraced many Italian, Polish, Hispanic and Filipino families.

Monsignor John J. Cassels succeeded monsignor Hughes and remained for ten years. In 1977 Reverend Joseph B. Bagley was installed as pastor. during his tenure at St. Aloysius, which ended with his sudden death on April 2, 1986, Father Bagley reinforced the commitment of the parish to its schools. Together with his fellow priests, with the sister of working in the parish and schools, and with a growing number of involved lay members, Father Bagley launched a variety of new programs and ministries, including the introduction of the 10:15 am Mass in Spanish.

Father Francis DeDominico, former Academic Dean of Immaculate Conception Seminary, was installed as the seventh pastor on June 29, 1986 and presided over the celebrations of the ninetieth anniversary of the parish in 1987. He initiated the extensive and sorely needed renovations and redecoration of the church and has encouraged the very growing parish involvement with the city and especially with the neighborhood surrounding St. Aloysius.

The history of the parish is, of course, the record of the blessings of God and the sum of the individual efforts of many thousands, from the poor working people who contributed so generously to erect the church, to the many sisters, especially the Sisters of Charity who staffed the schools, to the priests who ministered to all who sough their help, to the employees of the parish and its schools, and to the generations of parishioners, some who were born here and baptized in this church, others who joined the parish after leaving homelands on the other side of the world. All who have been touched by St. Aloysius trust that it will carry on as a vigorous spiritual leaded of the west side of Jersey City and continue to meet the need so keenly felt ninety-five years ago.